Skip to content
Home > Scottish soldiers, the Fens and godwits

Scottish soldiers, the Fens and godwits

As home to the majority of the UK breeding population, the fenland landscape is a very important one for black-tailed godwits.

Beginning in Roman times, efforts have been made to change the landscape of the Fens, often with the aim of increasing drainage and making more land available for farming. In the 17th century, two rivers were cut to join the Great Ouse River to the sea at King's Lynn. These rivers, the Old and New Bedford, and the flood storage area they created, the Ouse Washes, dramatically changed a large area of the Fens.

At WWT Welney's Godwit Festival in June 2019, our team learned about the involvement of prisoners of war in the drainage works, particularly in the construction of the New Bedford River. Prisoners of war from many places are thought to have been sent to the Fens in the 17th century, including a large number from Scotland after defeat at the Battle of Dunbar in September 1650.

At the time of the festival, a local project called Origins, coordinated by The Word Garden, was looking into the history of these soldiers and sharing their story with the local community.

Moved by the story and fascinated by the work of The Word Garden and others keeping alive this part of fenland history, we at Project Godwit decided to name 2019 headstarted birds in honour of the Scottish soldiers.

Thanks to the help of Jean Rees-Lyons from The Word Garden, we chose 15 names linked to the soldiers and presented the Origins project with a naming certificate at their event at WWT Welney at the end of June 2019.

We hope these birds and their offspring and the story of the Scottish soldiers will be a part of the fenland landscape for many generations to come.

More information on the Scottish soldiers is available at the external links below: 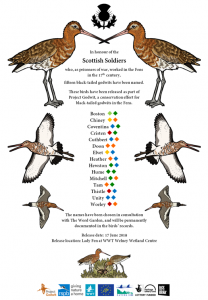