Our headstarted godwits have now been released into the wild at the project sites. This year we released three cohorts of godwits at two different sites, the RSPB Nene Washes and WWT Welney. A total of 48 chicks were released into the wild this year. The chicks are released when they are approximately 30 days old, which is the age at which godwit chicks would naturally fledge in the wild. You can see a video below from WWT Welney of the moment some of the birds were released. It was such a privilege to see the chicks take their first flights into their new wetland home. The hope is that they will return to the Ouse Washes to breed in future years. Twenty-one of the birds released in previous years have been seen at the project sites this season.

The new challenge for the team is to monitor the chicks now that they have been released. Several of the birds have been seen at WWT Welney in recent days, but we are still waiting for our first sightings of the birds from further afield. If you visit a wetland site in the coming days and weeks, please keep an eye out for these special birds. We rely heavily on colour ring sightings to help us monitor the godwits once they move away from the release site and we’re very grateful to those birdwatchers who send in their colour ring sightings. In previous years we have received sightings from Norfolk, Essex, Somerset and Hampshire – all valuable information which helps us to build a picture of where the birds are migrating. If you see a black-tailed godwit with a lime E colour ring, please tell us about it here. You can also check out our sightings map here. 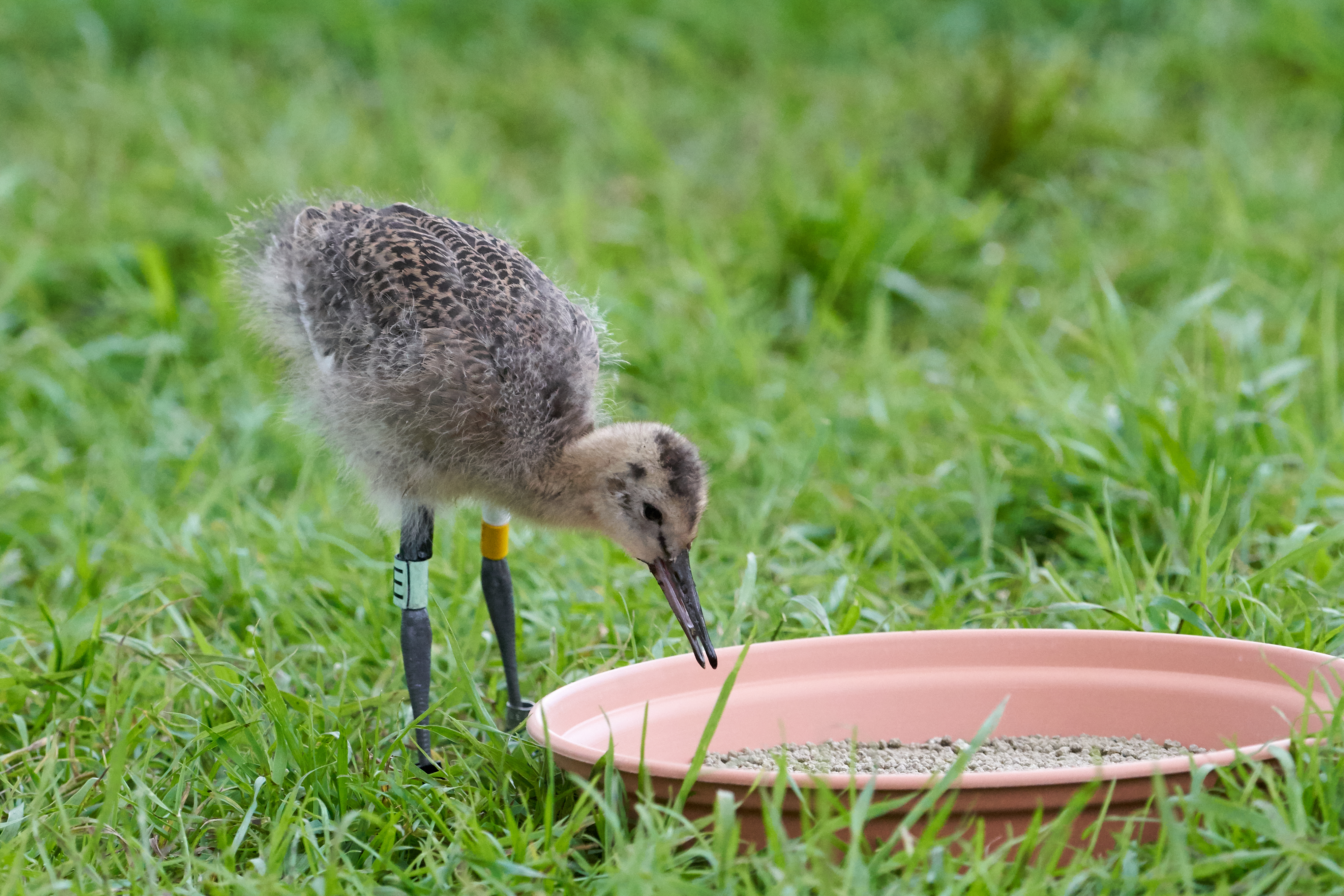 Black-tailed godwit inside the rearing aviary.

This year fifteen of the headstarted black-tailed godwits have been named to honour the Scottish soldiers who, as prisoners of war, worked in the Fens in the 17th century. The names have been chosen to represent the story of the soldiers in consultation with The Word Garden’s National Lottery Heritage Fund project: The Scottish Soldiers, the Ouse Washes; the Origins of Landscape Change in the Fens, (aka Origins).

Cristen, Cuthbert, Mitchell, Hewston, Hume, Worley and Chiney are the family names of soldiers listed in the Adventurers’ Minute Books. Place names are recognised with Doon, after Doon Hill in the Battle of Dunbar; Elvet, after Elvet Hill where some of the soldiers were laid to rest and Boston, after the US city which was the destination for soldiers deported on the ship Unity. Fictional characters from a story produced as part of the Origins project Tam and Coventina are included as are symbols of Scotland, Thistle and Heather.

Thank you to Jean Rees-Lyons, Artistic Director of The Word Garden, for helping us identify these names. 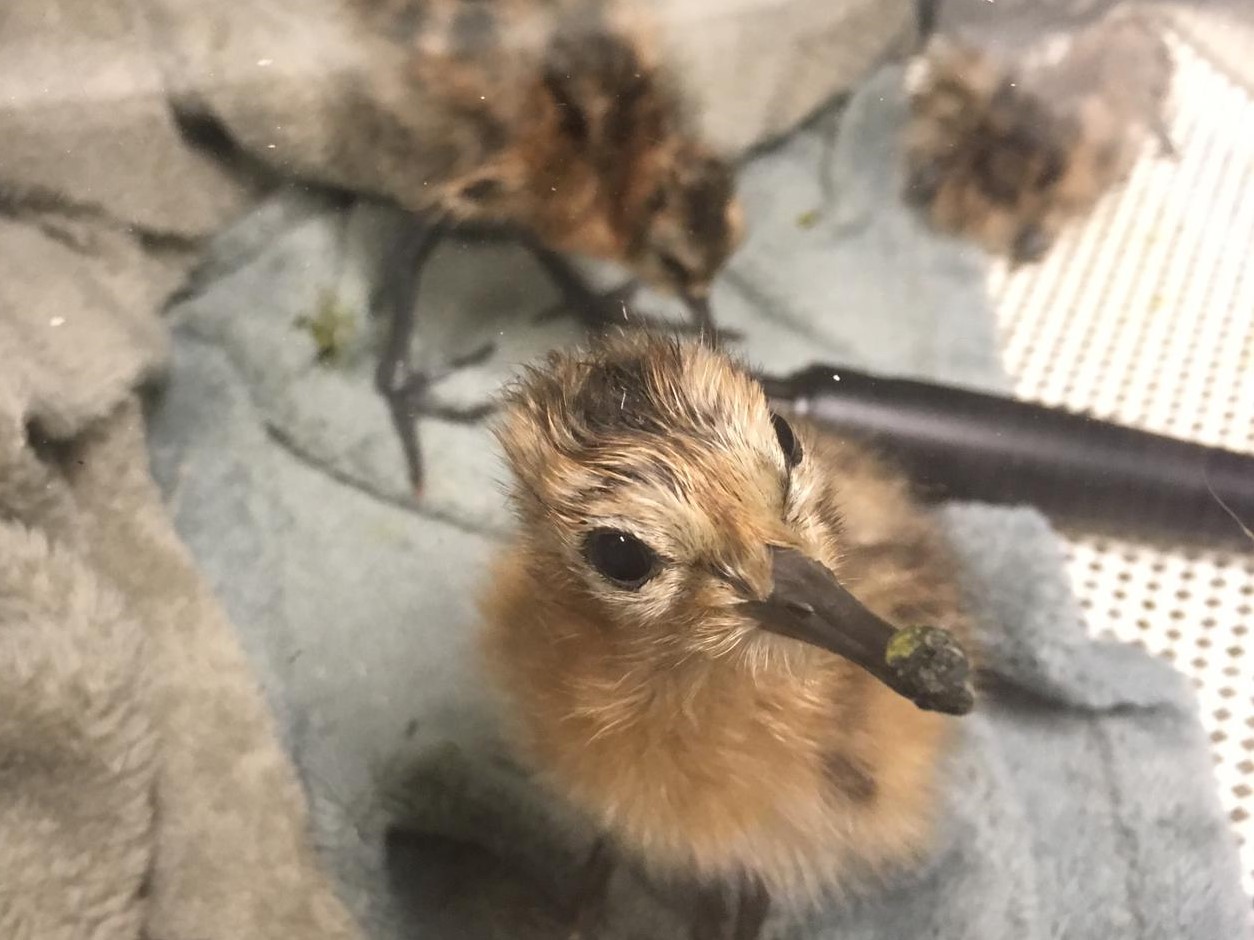 We now have 48 chicks in the headstarting facilities at WWT Welney. The chicks started hatching towards the end of May and are doing well. The chicks spend the first week of their lives inside a specially adapted portacabin at WWT Welney. Once they are old enough they are then moved into rearing aviaries situated within the grassland at Welney. This outside space gives the chicks the opportunity to experience the sights and sounds of their new wetland environment, whilst still under the protective care of the aviculture team. Our oldest chicks have recently had their colour rings fitted. Each chick is given a unique combination of colour rings so that we can follow their progress after they have been released. A sample of birds are also fitted with a geolocator, a tiny lightweight tracking device which is being used to follow their migration route. In a few days’ time the chicks will be given a health check before being moved to the release aviary. Our aim is to release the chicks when they are approximately 30 days old, which is the age at which godwit chicks would naturally fledge in the wild. 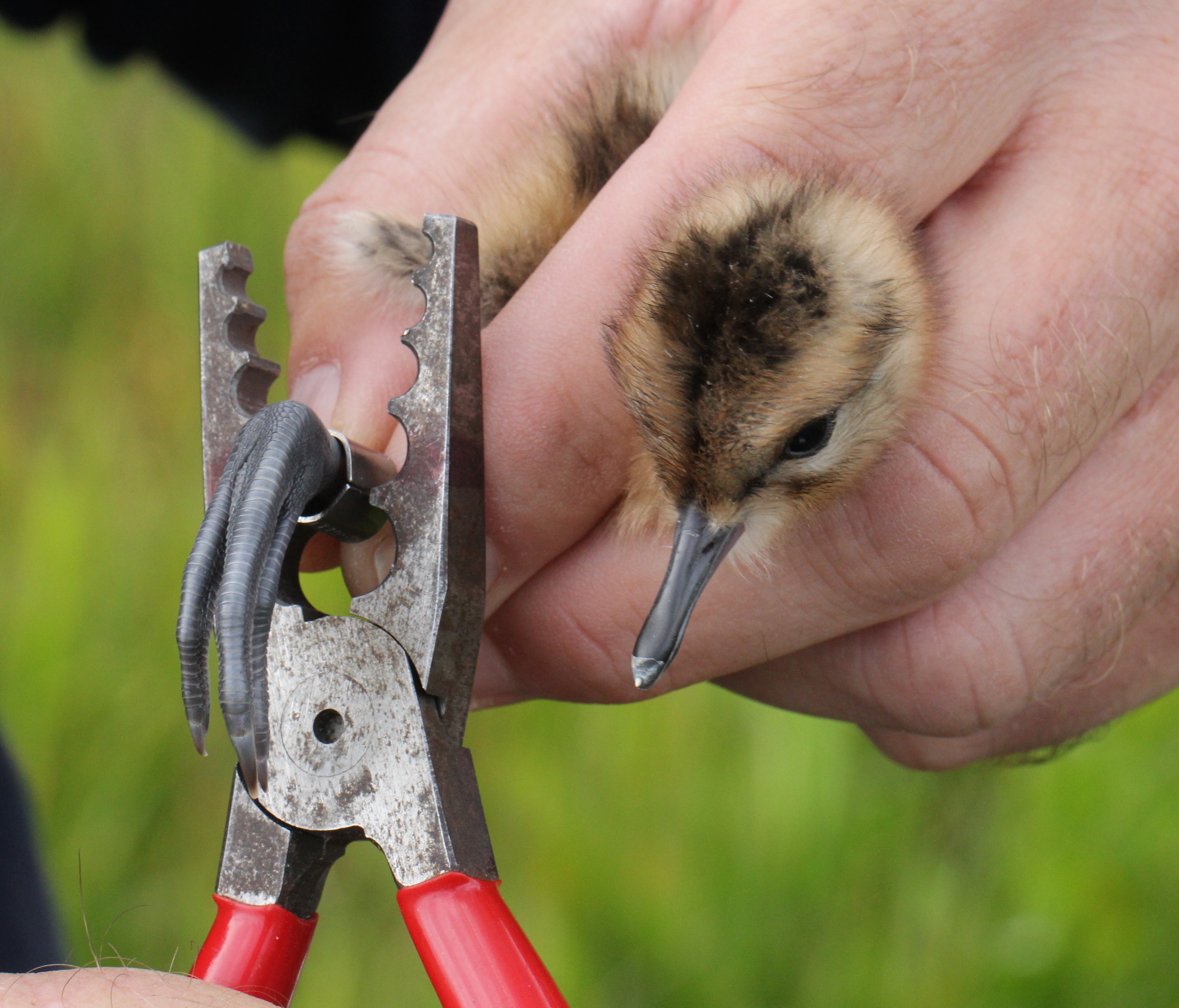 It has been a season of mixed fortunes for the godwits breeding at the project sites. Denver and Purl, both released in 2017 attempted to nest, but in an unexpected event their nest was disturbed by a goose and the pair subsequently abandoned the nest. These birds are still quite young for black-tailed godwits so they may still be learning the ropes. Anouk and Delph, another pair headstarted in 2017, successfully hatched their nest and we will be monitoring the pair closely to see if their chicks fledge. We have been monitoring the nests of black-tailed godwits at our project sites so that we can understand the cause if a nest fails. To date several nests have successfully hatched although we have lost some nests to predation and some nests to flooding. Because black-tailed godwits nest on the ground they can be particularly vulnerable. The team are now monitoring the godwit families so that we can identify how many chicks from the hatched nests go on to successfully fledge. Monitoring the godwit families in knee high vegetation is easier said than done, but the chicks are colour ringed so that we can identify them in the field – if we can see them!

Inspiring the next generation

We have been visiting schools close to the project sites to deliver tailored sessions about black-tailed godwits and their fenland habitats. We have been blown away by the enthusiasm shown by the children about their local environment and the special wildlife that it supports. We are delighted to welcome several new schools to our Godwit Guardian scheme including Millfield Primary School, Hillcrest Primary School, Townley School and Pre-school, Hilgay Riverside Academy and Ten Mile Bank Riverside Academy. Becoming a Godwit Guardian is a fun (and free) way that schools and community groups can get involved in Project Godwit by linking to one of our headstarted godwits whose progress you can follow. To find out more please visit our website here. 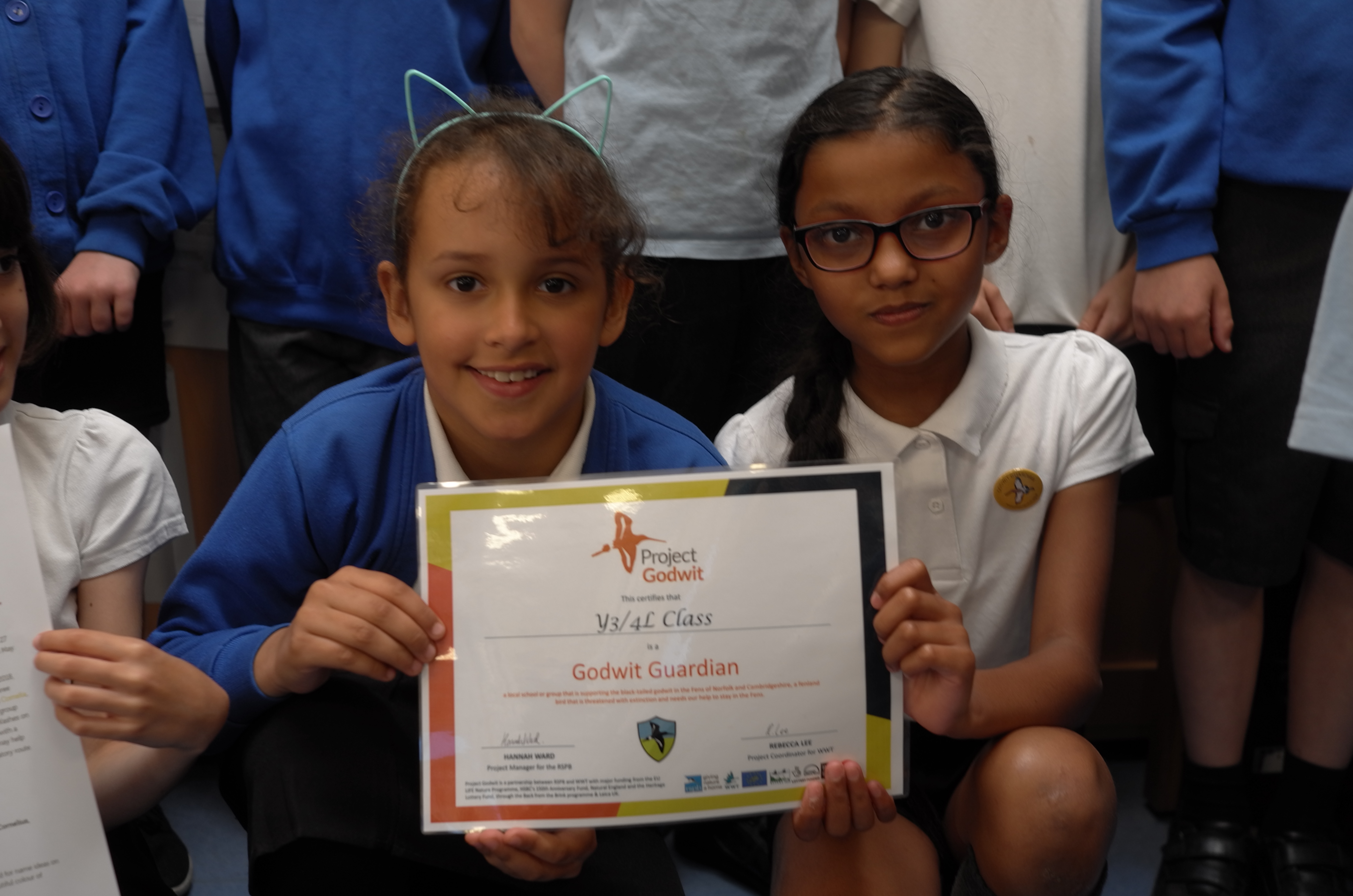 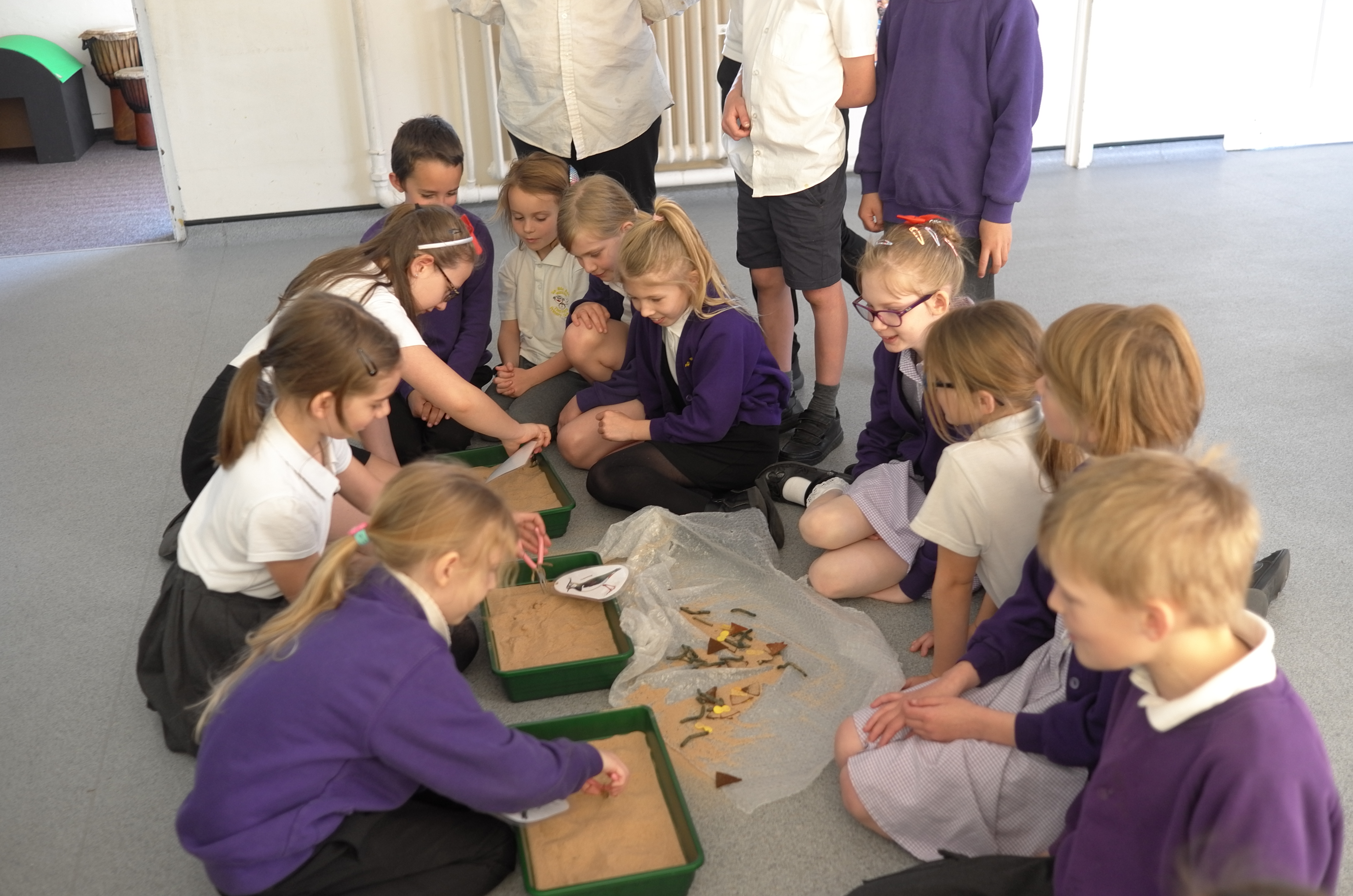