Three of our headstarted birds have been seen this September and October in locations around the French coast. Ensuring that released birds are individually marked with colour rings allows us to monitor their progress. It’s great to learn that these birds are continuing to do well after their release. These birds are probably making their way south for the winter. Black-tailed godwits are migratory, and birds from the limosa subspecies spend the non-breeding season in wetland sites in Spain, Portugal and West Africa.

So who has been seen and where?

Pickles LN-L(E): Pickles is a male headstarted bird who’s egg was rescued from muddy farmland back in April this year. Pickles was released on 9 June at WWT Welney. He’s been spotted on two occasions at Porte-en-Re, on the west coast of France.

Caramel YG-WL(E): Caramel was released at the RSPB Nene Washes on 27 June this year alongside 14 other young godwits. She’s also been seen at Porte-en-Re, on the west coast of France.

Budly OfO-WL(E): Budly is a male who was released at WWT Welney on 19 June. He’s been seen on the north coast of France, close to Le Harve.

Although godwits are known to use sites in France throughout the non-breeding season, we’ve received relatively few re-sightings of birds marked here in the UK, until now. We are using colour ring sightings to build up a more complete picture of where the birds breeding in the fens spend their time away from the breeding grounds. For example, one of our breeding females from the Nene Washes has been seen in Senegal for the last three winters in a row. When she was first re-sighted in 2016 this was the first time a bird breeding in the UK had been spotted in West Africa.

Colour ring sightings are fantastic, but they still only provide us with details of where are bird has been at a particularly point in time. To build a more complete picture of the godwits’ movements, we’ve been fitting some of the birds with geolocators. Geolocators are tiny light-weight tracking devices, which can be fitted to a leg-ring or flag. Using geolocators will allow us to build a more complete picture not only of the locations these birds are using, but also the schedule of their migration. It’s early days for this work – one of the difficulties of using geolocators is that you have to recapture the bird in order to retrieve the tag – but in the future we hope we will be able to compare the migratory behaviour of our wild and headstarted birds. 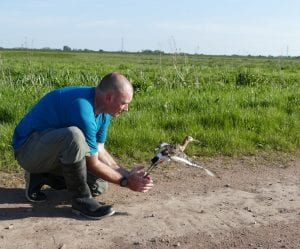 None of this would be possible without the bird watchers and observers who spend their time looking for ringed birds. We’d like to thank everyone who has helped us keep an eye out for these special birds. If you think you have seen a godwit with a lime leg ring, stamped with the letter E, you can let us know about it here.